After we have seen unemployment numbers explode like never before in American history, with an increase of 3000% last week alone and 10 million Americans so far having filed for unemployment, it is time to let the facts speak for themselves. With every day, every week that the economic shut-down is being kept in place, hundreds of thousands of additional businesses will be defaulting and millions of additional Americans will be losing their jobs. Many companies will close their doors forever and many more unemployed Americans will have to sustain a long time of living on the welfare state's payroll, trying to literally survive on a bare minimum.

Furthermore, it is unlikely that the aid package of roughly $2.5 trillion will be sufficient. As of Friday last week, 9,000 small businesses had already claimed almost $3 billion in aid. There are about 30,000,000 small businesses in America and realistically, the aid package would need to be three times as much to be somewhat effective. The total national debt of the United States already amounted to $25 trillion - and that was before the Corona-virus hit. Putting this into perspective, it took the American Republic a little less than 250 years to accumulate $25 trillion in debt while the country's leadership just decided to add another 10% in only one week. And if the shut-down will prevail for another 30 days or even more, there is a fair likelihood that the government will amend the rescue package with another $1 - $1.25 trillion.

Former Vice-President Dick Cheney enlightened the world by famously saying that "deficits don't matter" back in 2002. So why should we worry? Why care about the financial standing of governments, corporations, or private citizens at all? Why not just keep on printing more money, distribute it among the population, and live in a land of milk and honey, happily ever after? It is not that ridiculous of a thought, is it? Governments around the world have taken that course, hence, why not just continuing down that road in the future? So far, we have not seen a fiscal crisis whatsoever.

Here is why: it will not work for much longer. Because capitalism and its incentives do not work that way. Of course, we all know that capitalism is not the only form of how a country can be organized, how society can exist; but we have learned that it is the only form that has allowed society to peacefully coexist. Also, capitalism has by far the best track record of increasing everyone's quality of life and life expectancy over time. While it is true that a capitalist society, based on a free market system, does not increase wealth equally for everyone at the same rate, it is also true that it results in a positive bottom-line for the vast majority of the population. Nowadays, the average citizen can buy a home, own a car, send the children to school, and go on a vacation once a year. We have come a long way since the industrial revolution began in the 1760s. No other system has achieved similar results. It is not perfect but all imperial data we have suggest that it is the best system ever tried. Last but not least, we have also learned that socialism and communism are not compatible with human nature and society always falls apart in the end.

The world is changing and it is changing at a fast pace. If we look back in history, there are multiple examples of countries that had to declare bankruptcy or initiated a currency reform which is technically the equivalent of declaring insolvency, just in different terms. We don't even have to go far but can start in post World War One Germany and its Weimar Republic, where debt driven hyperinflation since 1920 led to the country reforming its currency three years later, erasing its government debt but also the wealth and savings of millions of citizens. Needless to say, any such act by any government always ends in civil unrest, poverty, and despair for a large number of the population as they are being deprived of their livelihood. Also, many times there are long term consequences when the people's anger and disappointment in their government results in extremist forces gaining power, such as the National Socialists and Hitler did as of March, 1933.There are many more examples of currency reforms, currency devaluations and revaluations in recent history, from Greece to Italy, Spain to Argentina, just to name a few.

The truth is that, if each country operated by itself in its own micro-cosmos, a significant expansion of its monetary system, leading to hyperinflation and an according reform thereafter, in order to wipe out the out-of-control debt, would likely not be causing as many major issues as it does in a world that is interconnected by global trade and commerce. And as we have been living in a globalized economy, with countries competing with each other, producing, buying, selling, and consuming global goods and services in different currencies, any such state's default or currency reform is potentially putting the population of that country into a huge competitive disadvantage.

Governments and central banks around the world have been addressing many economic crises with overwhelming stimulus packages, adding trillions of dollars to the global monetary supply, without equivalently increasing production out-put at the same time. The question is, why has it not been a major problem over the past few decades? Mainly because every country around the world has acted in the same way and relatively to each other, the ratios between the major currencies and purchasing power have remained similar. As long as the United States, Europe, and Japan together with the U.K. and others implement expansionary monetary measures similar in respect to their GDP, debt ratio, and purchasing power, not much changes globally. Furthermore, since the United States has been the single world economic power, with the U.S. dollar having been the global trade currency, the country has had all the means to make adjustments whenever necessary with the Fed's printing press in its own backyard. While the past century undoubtedly needs to be referred to as the "American Age", by now we believe that we have entered into a stage of decline, just as we have seen with any other previous world power in the annals of history. Just like the Greeks, the Egyptians, the Romans, and the English. America will remain an important and powerful country but it will be forced to step aside for the rising power of the Far East, the monster that ironically seems to be the origin of this turmoil that has hit close to home, the People's Republic of China. It has been happening slowly but steadily, economically and militarily, and the consequences from the political and economic actions taken in western democracies due to the Coronavirus will accelerate this shift in power and influence even further. More and more, countries will continue to circumvent the U.S. dollar and in many cases are already trading directly in Renminbi against their own currency.

Economic growth is shifting and the privilege of the United States, running the world's reserve currency, is coming to an end. And for a country like the United States which imports $617 billion more than it exports every year, this will have significant consequences. The gigantic increase in the money supply over the past 30 - 40 years, plus the additional issuance of debt in amounts unheard of last week are unprecedented and likely to trigger inflation rates that this country has not experienced since the late 1970s. Especially, since the funds this time are largely going directly to consumers and businesses instead of the banks, the money will much quicker become part of the real economy's supply and be spent rather sooner than later. Also, due to the way the "loan forgiveness" piece of the aid package is structured, most of the money will be spent right away. The supply of real money in circulation will increase at a fast pace and probably outweigh domestic good supplies rather sooner than later, as companies will only be producing rather cautiously. Furthermore, the weaker dollar and falling purchasing power therewith will result in increasingly "imported inflation" numbers based on foreign goods becoming more expensive in U.S.dollar terms.

Due to the lack of consumption given the lock-down situation and with one third of the workforce likely to be unemployed for quite some time by the third quarter, it is possible that we may see more deflationary tendencies in the short term with an oversupply in goods and services versus demand, until inventory levels that were built before the crisis will have gone through a period of downward adjustment. However, once we will be getting back to a time of more economic growth, there is a high likelihood that the recovery process will be interrupted by painful inflation for which the time to prepare is now. Normally, the Federal Reserve would start increasing interest rates by that time to prevent inflation; this time though such a move would stall the desperately needed growth and nobody will be able to afford higher interest rates either; not the government, not the business community, not the consumer.

Ultimately, it will turn out that deficits do matter and that a misappropriation in taxpayer funds still can push a country and its society over the edge. Since the United States abandoned the gold standard in 1971, government bureaucracy and free market interventions have lined-up a long row of domino stones. Those stones have been falling for quite some time but so far, mainly unnoticed by the broader public; this crisis though has the potential for the pace to accelerate and there is a good chance we are going to see the end of the line in the not too distant future. Realistically, the U.S. has no other option than to reform its currency in order to get rid of its debt. And this scenario becomes even more likely if we should find the country suffering from hyperinflation anytime soon. It seems clear at this point that the debt will never be paid back and annual interest payments already eat-up a substantial piece of the annual budget, expected to total $7 trillion over the next ten years. By 2021 already, interest spending is expected to exceed all mandatory spending other than that of social security (estimated by the Congressional Budget Office). And those numbers were before the Coronavirus hit, too.

Hence, we recommend to keep diversifying internationally as far as custody and jurisdiction are concerned. Furthermore, we continue to focus on equity investments in Swiss francs, among other foreign currencies. The Swiss economy remains solid with low unemployment and its government keeps on posting a budget surplus on a regular basis ($3.7 billion as of 2019 which would be equivalent to $117.5 billion in the United States as of 2018, given the size of its economy, according to Reuters). Historically, the Swiss market also outperforms the S&P 500 by a multiple, mainly based on the positive impact of the Swiss franc versus the U.S. dollar that has increased by almost 500% since the 1970s (kindly see chart below/ attached): 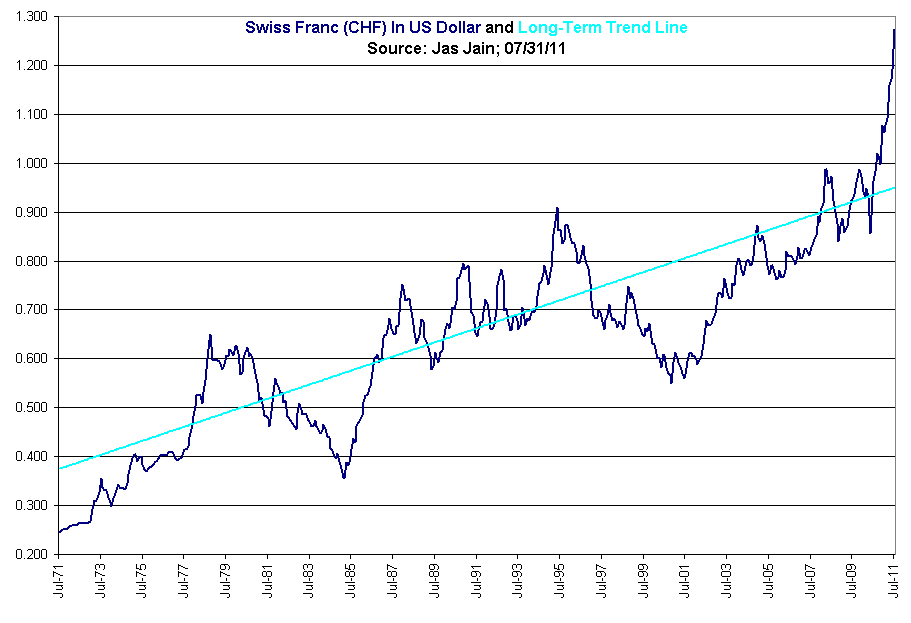 Combined with steady annual market returns of around 8% per year on average, this makes for a solid advantage and good protection against rising inflation (kindly see chart below/ attached):

Last but not least, we strongly advise to hold a substantial exposure in gold and alternative investments with a low stock market correlation, private equity as well as some selected real estate investments in every portfolio. Depending on the risk profile, we recommend 5 - 20% of the overall portfolio value to be held in such instruments. After all, a land of milk and honey is just what it always has been: Utopia. And Dick Cheney knows that, too.