When I first came to America, one of the most fascinating aspects of this amazing country was the people’s ability to ponder and dream, and to make the world whatever they wanted it to be. Of course, a lot of this was driven by the factory of dreams in the Hollywood hills but it overall was a ray of positivity, shining down on the unlimited capacity for imagination of the human mind and it propelled my own thinking towards the pursuit of happiness, like no other culture could ever have. When I was a child, traveling the Land of the Free was full of adventures, from boating through an imaginary land at Pirates of the Caribbean in Orlando, all the way to watching the knights at one of the Medieval Times castle’s fighting tournaments over a luscious dinner in Las Vegas. Never would I have thought that those “medieval times” might creep-up on my home continent in real life some 40 years later. In a nutshell: Europe is likely about to experience an energy crisis this winter like we have never seen it before. Energy costs are completely out of control and the supply is most probably not going to meet demand. As already pointed out in our July letter, it is a mainly manufactured crisis, driven by either ignorance, incompetence, or in some cases potentially even ill will. Either way you look at it, Europe’s energy policy has failed which best shows by taking a glance at the average energy cost per Megawatt hour in the EU: 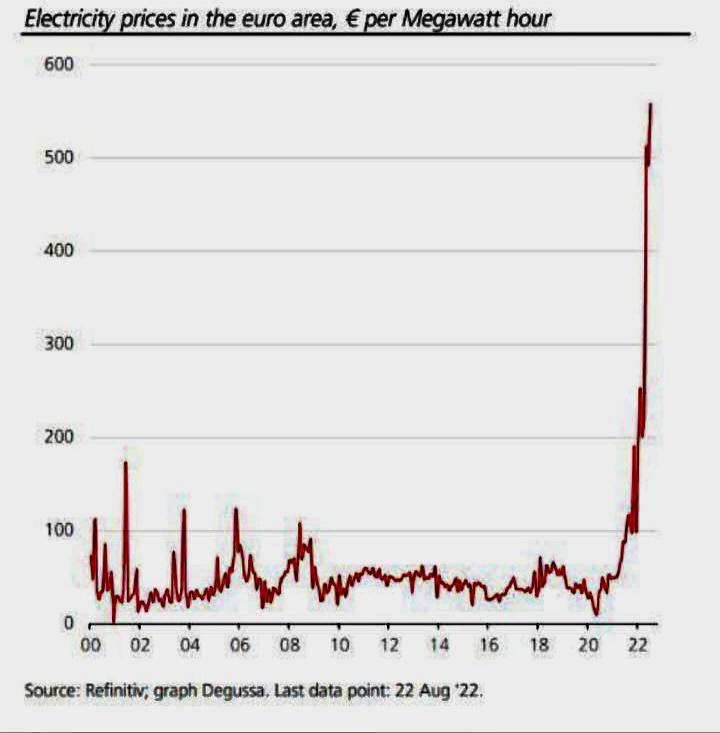 It is hard to imagine that a development like this is being caused without any true underlying crisis and is a product of policy decisions which have been made during the last two decades. But it is the truth. On the one hand, European nations like Germany have, against their otherwise historic rational thinking of efficiency and continuity, which used to be an anchor of the German mentality for hundreds of years, lost their mind completely when it comes to nuclear energy. Driven by a baseless fear, German chancellor Angela Merkel initiated the “Energiewende”, deciding that one of the cleanest and safest energy sources in the world was to be eliminated. For no good reason, whatsoever. On the flip, western countries have become obsessed with “climate change” and decided that it makes sense to tax, limit, and obstruct anything that looks like fossil fuels to an extent where the industry has no incentives to increase production due to costs and political uncertainty.

Finally, the European and American driven sanctions against Russia – which keep on making the Russian government richer and richer – have cut-off the key energy source for most eastern and central European nations; the straw that broke the camel’s back. And while western governments claim “climate change” is the greatest threat to mankind that ever existed, they nevertheless enter into so called “climate accords” which allow countries like China and India to limitlessly grow and pollute in order to push their global economic expansion. At the same time, the European elite puts the screws on their own people and accepts economic decay in their own backyard with prosperity, quality of life, and life expectancy taking an unprecedented nosedive across the western hemisphere. The most grotesque part in all of this is that, even if the climate was at the brink of collapse, the Paris climate accord would not be achieving anything to rescue the planet, since whatever emissions are being cut-back on one side of the planet, are being offset by an increase in emission on the other side. Even John Kerry, President Biden’s “climate czar”, admitted earlier this month that the reduction in emissions in the United States under the “Green New Deal” would not have a significant impact on the expected rise of the global average temperature predicted by the “experts”. It makes Europe and the United States look like Don Quixote in Miguel de Cervantes’ classic, fighting the windmills of alternative energy. Furthermore, it needs to be said that none of the gloom and doom predictions of climate change made over the past 50 years have become true so far. However, what has come true is that European governments have issued alerts, urging their citizens to buy firewood and candles, putting them on notice that it is likely to be expected that power will be out on a regular basis throughout the winter. Like toilet paper during Covid, firewood is sold out for months in many European cities. Back to medieval times – and not in the enjoyable way I got to experience them at the Excalibur on the Las Vegas Boulevard back in the day. German cities already are turning off the streetlights at night due to capacity shortages, cut-off energy for water heaters since hot showers and baths have now become a luxury the German people are not worthy enough of enjoying anymore, and achievements of civilization such as the use of dishwashers, ovens, or washing machines are being restricted through certain times of the day and week across multiple European countries. Obviously, such “goods of convenience” are unnecessary when you can cook your dinner over an open fire on your balcony at freezing cold temperatures, read Boris Johnson’s latest autobiography by romantic candlelight, and wear three layers of pajamas under a cozy wool blanket by the time you go to bed. Oh, and good luck trying to charge your newly bought electric vehicle. If you still can afford one, that is. After all, you are trying to do your part and pay your “fair share”. And this is just the beginning. The Daily Mail reported this week that many small and mid-sized businesses, especially cafes, restaurants, and pubs are closing for the remainder of the year as well as throughout the winter since they can no longer afford sky-rocketing energy prices.

Sadly, what we are seeing in Europe is likely to come to an energy grid near you in the United States soon as well. Utility companies across New England already warned that due to a lack of pipeline and distribution infrastructure, red tape, as well as supply issues, combined with rising energy prices, outages later in the year and throughout the winter are to be expected. A scenario that most likely is not going to be limited to the Northeast of the United States alone either.

Considering all these latest developments, we stick to our recommendation from earlier this year to stay clear of any investments in Germany, as well as any companies that maintain significant production sites in the country. We further recommend keeping and potentially increasing exposure to energy companies and related industries across the board, as well as to avoid the consumer goods sector and cyclical industries. Also, depending on risk profile and exposure, we recommend increasing short ETF positions on the German and overall European equity market, except Switzerland and Norway.